The rowstore is typically used for highly concurrent OLTP and mixed OLTP/analytical workloads. The columnstore is used primarily for applications where the data set does not fit in memory, the queries use mostly aggregates (in these cases the columnstore performs much better than the rowstore), or where cost-efficiency does not make using the in-memory rowstore possible.

Here’s an example of a query that creates a Columnstore table:

As with any other MemSQL table, we define a SHARD KEY. We define it on ProductId since it should allow for a more even distribution and preventing skew. It is also possible to randomly distribute data by having an empty shard key, with SHARD KEY().

If a CLUSTERED COLUMNSTORE is defined on a table, the rows of that table will be stored in a highly compressed columnar format on the disk. We describe the details of the format below. While MemSQL can execute any query on the Columnstore table that it can execute on Rowstore tables, some queries are more suitable for Columnstore tables than others. Some queries that can benefit from using Columnstore include:

Columnstore tables are also not constrained by the amount of available memory, unlike Rowstore tables.

Column-oriented stores, or “columnstores” treat each column as a unit and stores segments of data for each column together in the same physical location. This enables two important capabilities. One is to scan each column individually, in essence being able to scan only the columns that are needed to execute a query with a high degree of locality. The other capability is that columnstores lend themselves well to compression; for example, repeating and similar values can easily be compressed together. A simplified example is shown here:

By physically organizing data by columns, the database is able to scan and aggregate data for individual columns very quickly, simply because less data needs to be scanned. This makes columnstores well suited to analytical workloads. The trade-off of using the columnstore is that it does not lend itself well to inserting or manipulating individual rows quickly. Columnstores are usually batch-loaded for optimal performance. The combination of efficient batch loading and processing of analytic queries contribute to columnstores’ frequently being used in data warehousing scenarios.

Column segments typically contain order of 10’s of thousands of rows, in this example the segment size is 5 rows for readability .

Columnstore - Each row segment contains one column segment per column in the table. For simplicity this example contains the initial load of the table and has a single sorted row segment group. 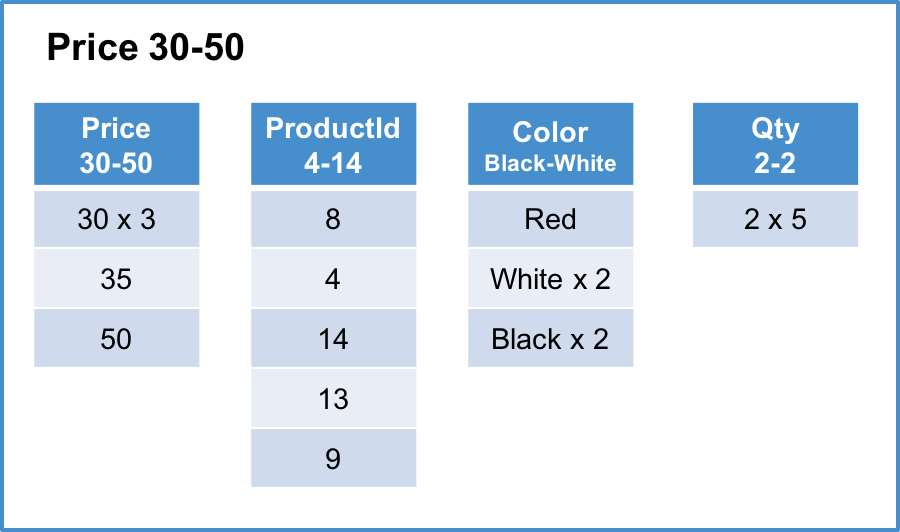 Unlike other columnstore implementations, MemSQL supports very fast, small-batch writes (such as single row inserts) directly into columnstore tables. This is implemented under the hood by storing hotly updated rows in a row-oriented skiplist before they flush to the columnstore. This is all handled automatically and behind the scenes, and rows are visible to reads as soon as they are saved to the rowstore.

When using MemSQL columnstore indexes the following are changes that can occur against the store.

MemSQL uses an advanced algorithm that allows it to maintain the order as close to sorted as possible, while data is being ingested or updated. Such a process is called background merging and is constantly running in the background if the order of the row segments can be improved.

Background merger is optimistic, in that if at any point it tries to move around data which is also being changed by a concurrent UPDATE or DELETE query, it will discard all the work it has done so far and start over. It works on a small chunk of data at a time, so it is always a relatively small amount of work that is being discarded. However, in the presence of a very heavy workload it can be a significant slowdown compared to a pessimistic merger, which locks the row segments it is currently processing. A user can manually trigger a pessimistic merger by running an OPTIMIZE TABLE command. We will explain how to decide whether such a command is necessary, and how to run it, below.

To inspect the current state of the Row Segment Groups of a particular table, run SHOW COLUMNAR MERGE STATUS FOR <table_name> query:

Now take a look at the Row Segment Groups on partition 3. Clearly, it is significantly less optimized than the remaining three, and a select query like the one shown above will result in materializing 8 Row Segments. If the background merger is enabled, and no workload is running concurrently, within several seconds this partition would get optimized. However, in the presence of a heavy workload the optimistic background merger might fall behind. In this case it might be reasonable to manually trigger a pessimistic merger by calling:

If we run SHOW COLUMNAR MERGE STATUS as the OPTIMIZE TABLE is being executed, we might see the manual merger in action:

What this new row indicates is that there’s a manual merger running on the partition 3, and that at this time it has done 53.12% of the work.

At this time any highly selective select will materialize only one Row Segment per partition.

When a query matches multiple segments which are not currently cached in memory, it can benefit from prefetching. Prefetching improves performance on these types of queries by requesting the file from disk for the next segment while processing the rows of the current segment.